Auger drilling is done with a helical screw which is driven into the ground with rotation; the earth is lifted up the borehole by the blade of the screw. Hollow stem Auger drilling is used for environmental drilling, geotechnical drilling, soil engineering and geochemistry reconnaissance work in exploration for mineral deposits. Solid flight augers/bucket augers are used in construction drilling. In some cases, mine shafts are dug with auger drills. Small augers can be mounted on the back of a utility truck, with large augers used for sinking piles for bridge foundations.

Auger drilling is restricted to generally soft unconsolidated material or weak weathered rock. It is cheap and fast.

Air Percussion drilling is used most frequently in the mineral and water exploration industry.

The drill uses a pneumatic reciprocating piston-driven ‘hammer’ to energetically drive a heavy drill bit into the rock. The drill bit is hollow, solid steel and has ~20 mm thick tungsten rods protruding from the steel matrix as ‘buttons’. The tungsten buttons are the cutting face of the bit.

The cuttings or “chips” are blown up the outside of the rods and collected at surface. Air or a combination of air and foam lift the cuttings.

Air Percussion drilling is used primarily for mineral exploration, water borehole drilling and blast-hole drilling in mines, there are other applications such as engineering solutions, etc.

Air Percussion produces lower quality samples because the cuttings are blown up the outside of the rods and can be contaminated from contact with other rocks. Air Percussion drilling to depths of more than 200metres and could present quite a challenge to the drilling team as encountering water could rapidly clog the outside of the hole with debris, precluding removal of drill cuttings from the hole. Experienced drillers will however understand these limitations and through the use of drill enhancing fluids and proper drilling techniques, not only ensure that the hole stays open until completion, but also ensure further drilling. Depths in excess of 500m has been recorded in Southern Africa.
The use of multiple high-powered air compressors, which push 900-1150cfm of air at 300-350psi down the hole ensures drilling of a deeper holes up to ~1250m due to higher air pressure which pushes all rock cuttings and any water to the surface. This, of course, is all dependent on the density and weight of the rock being drilled, as well as the state of equipment used.

Core drilling and related methods use hardened steel or tungsten blades to bore a hole into unconsolidated ground. The drill bit has three blades arranged around the bit head, which cut the unconsolidated ground. The rods are hollow and contain an inner tube which sits inside the hollow outer rod barrel. The drill cuttings are removed by injection of compressed air into the hole via the annular area between the inner tube and the drill rod. The cuttings are then blown back to surface up the inner tube where they pass through the sample separating system and are collected if needed. Drilling continues with the addition of rods to the top of the drill string. Air core drilling can occasionally produce small chunks of cored rock.

This method of drilling is used to drill the weathered regolith, as the drill rig and steel or tungsten blades cannot penetrate fresh rock. Where possible, air core drilling is preferred over RAB drilling as it provides a more representative sample. Air core drilling can achieve depths approaching 300 meters in good conditions. As the cuttings are removed inside the rods and are less prone to contamination compared to conventional drilling where the cuttings pass to the surface via outside return between the outside of the drill rob and the walls of the hole.

This method is more costly and slower than Rotary Air Percussion Drilling.

RC drilling is similar to air core drilling, in that the drill cuttings are returned to surface inside the rods.

The drilling mechanism is a pneumatic reciprocating piston known as a hammer driving a tungsten-steel drill bit. RC drilling utilises much larger rigs and machinery and depths of up to 500 metres are routinely achieved. RC drilling ideally produces dry rock chips, as large air compressors dry the rock out ahead of the advancing drill bit.

RC drilling is slower and costlier but achieves better penetration than rotary air percussion or air core drilling; it is cheaper than diamond coring and is thus preferred for most mineral exploration work.

Reverse circulation is achieved by blowing air down the rods, the differential pressure creating air lift of the water and cuttings up the inner tube which is inside each rod. It reaches the bell at the top of the hole, then moves through a sample hose which is attached to the top of the cyclone. The drill cuttings travel around the inside of the cyclone until they fall through an opening at the bottom and are collected in a sample bag.

The most commonly used RC drill bits are 5-8 inches (12.7–20.32 cm) in diameter and have round metal ‘buttons’ that protrude from the bit, which are required to drill through rock and shale. As the buttons wear down, drilling becomes slower and the rod string can potentially become bogged in the hole. This is a problem as trying to recover the rods may take hours and in some cases weeks. The rods and drill bits themselves are very expensive, often resulting in great cost to drilling companies when equipment is lost down the bore hole. Most companies will regularly ‘sharpen’ the buttons on their drill bits in order to prevent this, and to speed up progress. Usually, when something is lost (breaks off) in the hole, it is not the drill string, but rather from the bit, hammer, or stabiliser to the bottom of the drill string (bit). This is usually caused by a blunt bit getting stuck in fresh rock, over-stressed metal, or a fresh drill bit getting stuck in a part of the hole that is too small, due to having used a bit that has worn to smaller than the desired hole diameter.

Although RC drilling is air-powered, water is also used, to reduce dust, keep the drill bit cool, and assist in pushing cutting back upwards, but also when collaring a new hole. A mud called liqui-pol is mixed with water and pumped into the rod string, down the hole. This helps to bring up the sample to the surface by making the sand stick together. Occasionally, ‘super-foam’ (AKA ‘quick-foam’) is also used, to bring all the very fine cuttings to the surface, and to clean the hole. When the drill reaches hard rock, a collar is put down the hole around the rods which is normally PVC piping. Occasionally the collar may be made from metal casing. Collaring a hole is needed to stop the walls from caving in and bogging the rod string at the top of the hole. Collars may be up to 60 metres deep, depending on the ground, although if drilling through hard rock a collar may not be necessary.

Reverse circulation rig setups usually consist of a support vehicle, an auxiliary vehicle, as well as the rig itself. The support vehicle, normally a truck, holds diesel and water tanks for resupplying the rig. It also holds other supplies needed for maintenance on the rig. The auxiliary is a vehicle, carrying an auxiliary engine and a booster engine. These engines are connected to the rig by high pressure air hoses. Although RC rigs have their own booster and compressor to generate air pressure, extra power is needed which usually isn’t supplied by the rig due to lack of space for these large engines. Instead, the engines are mounted on the auxiliary vehicle. Compressors on an RC rig have an output of around 1000 cfm at 500 psi (500 L·s-1 at 3.4 MPa). Alternatively, stand-alone air compressors which have an output of 900-1150cfm at 300-350 psi each are used in sets of 2, 3, or 4, which are all routed to the rig through a multi-valve manifold. 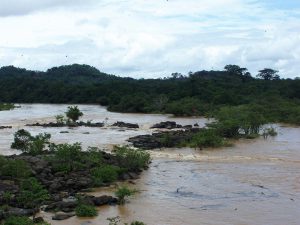 Groundwater is water located beneath the ground surface in soil pore spaces and in the fractures of lithologic formations. A unit of rock or an

Drilling techniques explained   Augur Drilling   Auger drilling is done with a helical screw which is driven into the ground with rotation; the earth